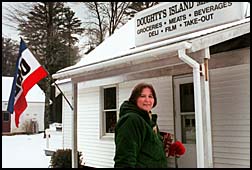 At left: Donna Damon with Pilot crackers at the Doughty Island Market on Great Chebeague Island, where the crackers are a hot topic of conversation.
Staff photos by Doug Jones At right: The cracker. Residents of Chebeague Island say Nabisco's Crown Pilot crackers are part of the island's unique culture. The crackers are in the family of unleavened breads sailors once took to the sea. 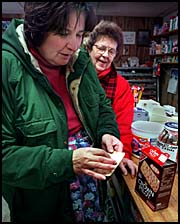 At left: Donna Miller Damon, left, and Sylvia Ross discuss the texture of the discontinued Nabisco's Crown Pilot cracker at Doughty's Island Market on Great Chebeague Island. Damon has appeared on ''CBS Sunday Morning'' to get Nabisco to resume making the cracker.

CHEBEAGUE ISLAND - Sylvia Ross finished her last box of Nabisco's Crown Pilot crackers on June 27. She remembers the date because she wrote it down on the box. And she's felt bereft ever since.

''I couldn't consider eating any kind of a chowder without a pilot cracker in the house,'' said Ross, 64, a native of Chebeague Island. ''They go together. To me, chowder and pilot crackers are like bacon and eggs.''

The Nabisco Biscuit Co. and its predecessors had made the staple cracker of coastal New England for 204 years when the company decided last May to stop producing the crackers.

Pilot crackers were discontinued along with about 300 other products as part of a worldwide restructuring of Nabisco Inc., the parent company of Nabisco Biscuit Co. The hard, plain, flat, rectangular biscuits were a ''niche product,'' sold in relatively small numbers only in Maine, Massachusetts and New Hampshire, said Ann Smith, the company's marketing director.

But now the New Jersey company is ''considering very strongly'' resuming production of the Crown Pilot crackers, Smith said Friday. She said Nabisco has received about 300 calls from consumers since last Sunday.

That was when Donna Miller Damon, 46, an islander determined to save pilot crackers, appeared on ''CBS Sunday Morning'' along with a couple of other Maine aficionados of Crown Pilot crackers. They were interviewed by a Maine humorist, Tim Sample, who hosts a regular Maine segment on the show and also loves pilot crackers.

Damon's appearance on the network television show, which has 5 million viewers nationwide, was one of the latest efforts in her campaign to get Nabisco, New England's prime supplier of pilot crackers, to change its mind.

Damon, whose roots on this Casco Bay island of 335 year-round residents date back to 1756, said she began her battle last summer because her parents, who are in their 80s, were sad they couldn't buy pilot crackers anymore.

The crackers are in the hardtack family, which was an unleavened bread sailors took to sea, according to Sandra Oliver, a food historian on Islesboro, who cooked a chowder with pilot crackers on the Sunday morning program. She said the name derives from pilot bread, which was a kind of ship's biscuit.

The crackers aren't just for chowder, but are often eaten crumbled with milk, spread with butter or peanut butter or in a host of other imaginative ways.

But pilot crackers are more than just food, says Damon, a free-lance writer and local historian.

She said they are an important part of New England's cultural heritage. The more she thought about it, she said, the more she felt angry at Nabisco's willingness to sacrifice tradition for the bottom line.

''What right does a national company have to determine what we eat on an island?'' Damon asked.

Damon began to garner publicity for her cause. She wrote an opinion piece for the Boston Globe, was written up in The Christian Science Monitor and Yankee Magazine and was interviewed by National Public Radio.

And in the meantime, she began to hear of other sources of supply for pilot crackers. One was the G.H. Bent Co. in Milton, Mass., whose predecessor started making pilot crackers in 1801. It stepped into the breach and was able to supply Doughty's Island Market on Chebeague with 150 packages in the late fall.

But those quickly sold out, and as of Friday the store had been without pilot crackers for about three weeks. The Bent Co., which still uses a handmade process to make the biscuits, wasn't able to keep up because of increased demand over the Christmas holidays, said James Pierotti, whose family owns and operates the company.

But he said the company, which also makes other crackers, cakes and pies, is gearing up to produce more pilot crackers and plans to be able to meet Maine's orders in the future. However, Pierotti said the company cannot produce them on the same scale that Nabisco did.

Damon likes the Bent Co. crackers, which islanders say are a bit harder and thicker than the ones Nabisco made.

But other islanders say they want the familiar Crown Pilot back. ''There's a different flavor,'' Ross said. ''I'm not sure what it is.''

It's fitting that the battle for pilot crackers is being waged from Chebeague Island because the crackers are perhaps loved here more than anywhere else.

''They're part of the island life- style,'' said one resident, Alnah Robinson, 27. ''If you go to someone's house for a cup of coffee, you'd find a packet of pilot crackers out on the table.''

Ed Doughty, who owns the island market together with his wife, Julie, said the demand for pilot crackers also increases in the summer when visitors swell the population to nearly 2,000 and carry away cases of the crackers to their home states.

On Friday, the Doughtys and other islanders had a lively discussion at the market on the best way to eat pilot crackers.

Ross told of Sunday night suppers as a child, eating Crown Pilot crackers crumbled in a bowl with milk. The hard crackers retained their texture in liquid and ''were like a cereal,'' she said. The meal was a staple of her large family, she said.

Another man chimed in that he also had eaten the crackers that way, with sugar.

Ed Doughty intervened: ''The best way to eat them is to drop them in lobster stew.''

Damon said her 13-year-old daughter, Rachel, puts a modern twist on the old New England favorite. She eats the crackers warmed in the microwave with melted Brie cheese on top.

Damon said if Nabisco doesn't resume making pilot crackers because they're only a small share of the market, it could erase part of the regional diversity that makes New England what it is.

''Regional diversity is really what makes the country an interesting place,'' Damon said. ''We should be honoring diversity, not homogenizing it.''

 Check out Nabisco's site. And find out more about chowder lovers being crushed by their cracker's crumble at a site that includes additional articles on the subject.
to top